What You Should Know About Chiropractic Adjustments 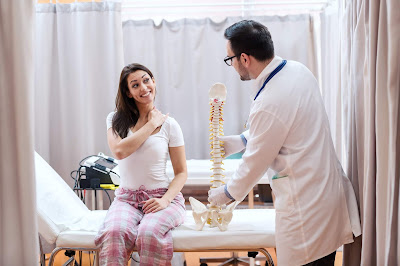 What Is a Chiropractic Adjustment?

A chiropractic back adjustment is a type of manual therapy (i.e., a treatment delivered through the physician’s hands) that seeks to realign joint subluxations. Note that the word subluxation means different things to a chiropractor than it does to a medical doctor, though either way, the definition of the term is “partial dislocation.”

When a chiropractor looks for a subluxation (via the diagnostic process,) the things she notes tend to be subtle gradations of position changes in the joints and accompanying soft tissue problems. When a medical doctor sees a subluxation on an x-ray, it’s a very obvious disconnect between the bones that make up a joint.

Learn more about the difference between the way an allopathic doctor sees a subluxation vs the way a chiropractor sees it.

Although a number of chiropractic methods and techniques exist, the most common version of an adjustment involves a controlled but fast directional thrust into the joint.

The goal is to bring the bones of a joint back to their normal, natural fit. It may take just one adjustment to achieve this aim (so that the adjustment “sticks,”) or it may take several.

Other more industry-related names for a chiropractic adjustment are: spinal manipulation and Grade 5 mobilization. Physical therapists and osteopathic physicians are two other types of health providers who are sometimes trained and licensed to give a Grade 5 mobilization treatment.

A Reputation for Back Cracking

You probably already know that chiropractors are often referred to as “back crackers.” This nickname may have been bestowed based on the cracking and popping that’s usually heard during a treatment.

A lot of people associate these sounds with a successful adjustment. But in reality, they may have nothing to do with accurate re-alignment of your joints. Instead, they are thought to be a result of cavitation, which is a sudden pressure decrease inside the joint (brought about by the manipulation.) Cavitation causes gasses in the synovial fluid to be released into the space between the bones that are being adjusted (called the joint space.)

According to Brodeur, in his 1995 study published in the Journal of Manipulative Physiological and Therapeutics, these gasses comprise about 15% of the volume of the joint.

And while it’s true that the mainstay of the chiropractic profession is an adjustment of the spine, most also adjust the pelvis as a routine part of the treatment. Some also regularly adjust other joints such as knees, feet, wrists, and more.

How Well Do Chiropractic Adjustments Work?

According to the National Center for Complementary and Integrative Health (NCCIH), spinal manipulation is one among several holistic therapies that have been proven to provide low back pain relief. Pain relief experienced by study participants who underwent chiropractic adjustments was mild and moderate, according to NCCIH.

Other holistic therapies that NCCIH says yield similar results include massage therapy and exercise. Physical therapy is on this list, as well, even though many people think of it as an allied health profession, rather than a complementary or integrative health field.

If you have chronic low back pain, and you want to get it treated by a chiropractor (or osteopath or physical therapist who performs spinal manipulation,) you’re in luck. A review of medical studies done by the Cochrane Back Group, and published in the June 2011 issue of the journal Spine, found high-quality evidence that this treatment is just as good as other treatments for the same condition. Such comparison treatments included the use of heat, sleeping on a firm mattress and/or taking pain relievers.

Article Source: https://www.verywellhealth.com/chiropractic-adjustments-297025
Posted by Terry Minion at 10:00 AM